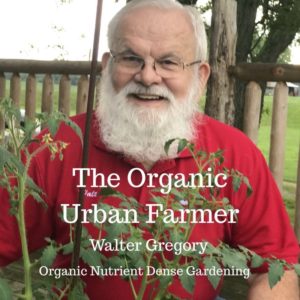 Walter Gregory’s journey began in Alton Illinois when he was a young teen; the story began his lifelong passion for organics and sincere love of the earth in a way that blends faith and nature. If you are fortunate to be in his audience, you may hear him speak about his journey and you can read about this in his book, A Man Named Lathey. Lathey was THE influence who brought him into knowing farming by the moon signs, tilling with a mule, and planting by hand, and using absolutely no chemicals on any portion of the land; teaching as a 74 year old man to a young determined 14 year old boy.

A father of 3, grandfather of 9 and married for nearly half a century, he says his “…50 year free home trial is about over…”. Of course, his humor is obvious although it often takes people a moment to realize this gentle man is as funny as he is soft spoken.

Walt attended University of Missouri, Rolla to study civil engineering prior to being drafted into the Army. After serving his country he received a Bachelor of Arts in Economics and an additional degree from Methodist University in Fayetteville, North Carolina. He then attended graduate school at St. Mary’s-of-the-Woods College, where he studied Earth Literacy.

While serving in the military during the Vietnam war, he became a Green Beret. As a young man in his 20’s, he learn demolition, bridge construction, and mine warfare.

It was his education in the military that started his journey of educating others. He was recruited by the US Government to travel around the world and train other select military in all branches of service to learn these skills in the name of preserving freedom.

He was awarded the title of Outstanding Instructor, a distinguished honor presented only quarterly and to very few.

Transitioning out of the military back into civilian life, he became a very successful insurance agent and then broker who built his book of business from scratch. He has retained his licensure and continues to offer insurance solutions alongside financial advising. During his career, with an ever curious mind he began studying with world class leaders such as Earl Nightingale, Jim Rohn, Zig Ziggler, and Bob Allen. Meeting Bob Proctor although only briefly, had a huge impact in his training 50 years ago in Neuro Linguistic Programming.

At the age of 49, he had done well enough to afford himself early retirement. When his wife asked — “What are you going to do now?” He replied that he was going to return to the outdoors and his passion for authentic organic gardening. He purchased a parcel of land in his home state of Illinois, and over the past 3 decades has developed it into a Certified Organic Farm, developed a unique approach to garden design, incorporating farm animals, opening it to the public, and also offering a restaurant experience — R Pizza Farm.
He has spent the last 25 years teaching organic food production across the country. He taught nature classes, both beginner and advanced, at Nature Lyceum in Long Island, New York.

His passion for organics continues to this day; he has formulated a nutrient dense material for farmers and gardeners to grow healthy, rich, nutrient dense food and herbs in order to enjoy authentic well-being. Food is our medicine, he proclaims with authority.

He has spent the last several decades perfecting what he learned as a 14 year old boy about the organics of life. He is sought nationwide as a speaker and a teacher for his knowledge base. Dr. Deb Carlin openly shares her delight in taking him on as a significant business partner in her corporation where, together, they are building their Institute of Well-being.